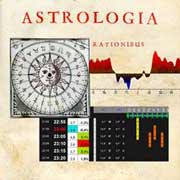 It is a fascinating realization that the relationships between heaven and earth are interpretable. This begins with simple observations, such as the changing phases of the moon, and continues in grasping complex cycles between the sun, moon, and planets.

Astrology is a tool to interpret these observations and insights. The world becomes describable as a connection between time and space, the first two reasons of being.

This interpretation seeks not to grasp the "how" but the "what". Historically, around 600 BC, this struggle for knowledge in Greece is literarily and philosophically comprehensible. The transition from mythical to logical thinking marks a tremendous upheaval, in which the motifs of space and occurrences, dominate and repress time and its characters.

Astrology is committed to time. For a moment it abstracts and characterizes the conditions and structures of our solar system and because of this, it does not start from the entire cosmos or from the individual human being, as it appears in space.

The interpretation is independent of a person or their needs and also of the complexity of the universe. This is precisely the genius because, from the limited perspective of the earth, one can still draw conclusions about the processes and developments on earth with great precision.

The course of time can be interpreted as "fate". Through the different methods and techniques, large and small discoveries can be found that have been handed down in the knowledge of many individual astrologers to this day in a disorganized and unsystematic manner.

For this reason astrology has nothing in common with psychology or esotericism. Nevertheless, if the term "astrology" is used in context or combination, it is always a sure sign that either the "psychologist" or the "astrologer" is in error or intentionally concealing deficits.

MORE THAN YOU THINK

Art historians or philologists mostly tell the history of astrology. Texts, pictures and astronomical devices are the sources of scientific workup. However, a sound knowledge of astrological methods and ways to capture the hidden and secretive relationships of heaven and Earth is lacking. You can describe the signs, but you cannot understand the language. Culturally and historically correct, these representations then miss the core of astrology.

In addition, it is customary to not acknowledge that there were astronomers, mathematicians, and physicists who also studied astrology. In fact, for some, their focus was on astrological activity and the other activities were necessary "auxiliary sciences" for the practice of astrology.

People who practiced astrology such as Isaac Newton, Johannes Kepler, or Georg Tannstetter, or cardinals, kings and emperors such as Pierre d'Ailly or King Manuel I, are misclassified. This shows the basic attitude of modern times and how it does not recognize the effectiveness or significance of astrology.