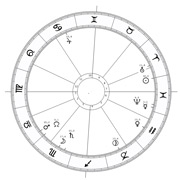 The foundations of astrology is the "Horoscope" or German "Stundenschau".

It is an ingenious insight that the relationships between heaven and earth are representable and interpretable. Man becomes aware of his spatial and temporal limitation on the earth, and in contrast to the boundless, immeasurable movements in the sky. Man encounters the numinous, the seemingly unspeakable and can translate it into a simple illustration, such as the horoscope.

By grasping the astronomical phenomena, rhythms and cycles, the search for "the permanent in the changing" continues.

By measuring time in one place, the repetitive and the constant become determinable. Already in the early history of humanity, the work of primordial and natural creative forces in the movements of the planets is recognized and given a divine name. This is how Jupiter, Venus or Saturn get their place in the sky.

To put into words this achievement, the scale and the characteristics of time, is one of, if not "the" fundamental cultural achievement of humanity.

The historical-astronomical observations of the sun, moon, and stars, or the measurement of time, therefore go far beyond the purpose of a sowing calendar or the determination of harvest cycles and feast days, as presented in the interpretation of cultural science.

The zodiac is the apparent orbit of the sun. It consists of the twelve signs of the zodiac. These zodiac signs are a scale of time for and on earth as a division of the sun orbit. The basis of this classification of the "Zodiacus", was already documented about 3000 years ago with the Sumerians. This discovery must certainly be made much earlier.

The constellations of astronomy, on the other hand, are something else. These are figurations of fixed stars, such as the "Big Bear" or the "Big Dipper", and represent an arbitrary, spatial division of the starry sky.

Especially in the 19th and 20th centuries, an "astronomical" form of professional astrology has developed, which uses statistical methods and astronomical correlations to adopt a scientific approach. This is not banal, but it is fatal because it leaves one in the limbo of the phenomenal world and does not grasp the real outside the phenomenon.

"Astra inclinant, non necessitant." There is some truth to this famous sentence about astrology. The stars do not force, they leave that to others.